Impakter: Making a Comeback – An Interview with ReUp Education

Impakter: Making a Comeback - An Interview with ReUp Education

For those who’ve had the chance to go to college, the time spent on campus tends to be remembered fondly by most. The friendships they made, the clubs they explored, and the social events they enjoyed often end up becoming life highlights, capped by that special moment when they received their diploma on graduation day. But not everyone who walks on campus the first day of freshman year makes it that far. Indeed, a report by the National Student Clearinghouse Research Center in 2014 noted that around 31 million people in the US had enrolled in college but left without a degree over the past two decades. Furthermore, most universities don’t have resources dedicated to tracking or monitoring this population, making it difficult for those who want to go back to school to start the process.It was due to this gap that ReUp Education was formed.

The organization partners with American universities to help bring former students back on campus, through the use of both personalized coaching and data analytics. But the engagement doesn’t stop there; ReUp continues to work with students once they start classes as well, to ensure that they don’t feel pressured to leave once again. I spoke with CEO Nitzan Pelman about ReUp’s unique technology, its business model, and how it stands out compared to other educational organizations.

What was the original impetus behind founding ReUp Education?

Nitzan Pelman: There were a couple of different reasons why ReUp made sense. One is that it’s solving a really big problem that a lot of universities don’t really pay much attention to. We know that there are around 30 million people in this country who have some college education, which means they often have debt but no value for their debt. By and large when a student leaves a university, most universities do not have many initiatives for what they do with students who have “stopped out”; this is the term that they use. Most students who drop out think that they’re going to come back, and for any one institution to build the infrastructure to really support those students and bring them back is a lot of effort if you’re going to do it the right way. That’s because you have to have the technology to find these people, you have to run the right kind of marketing outreach on the web, you have to get the messaging right, etc. You really have to invest in understanding this population in a really deep way.

We’ve invested in AI technology to analyze the quality of the interactions between the student and the coach, and we’ve invested in predictive modeling. That’s a lot of investment beyond simply having a human work with a student. All the stuff that happens before that interaction takes place and afterwards, that investment is upwards of $3 million. If there were a model where someone did this on behalf of many universities, as opposed to one university making the investment themselves, that would be a value-add for the industry. That’s how we embarked on this work. 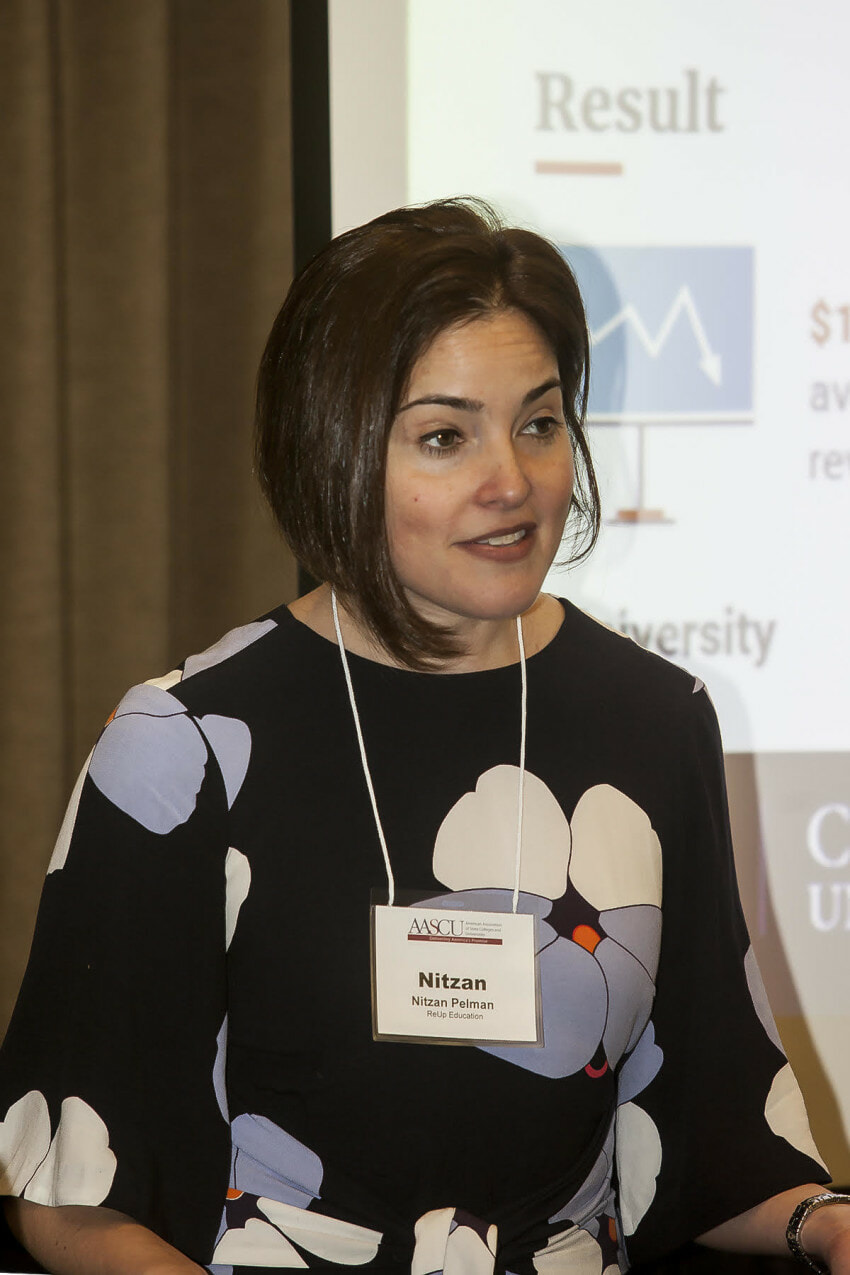 You mention this big problem that exists, what is ReUp’s role in bringing people back to school?

NP: We have a pretty interesting business model that’s all outcomes-driven and performance-aligned. The way it works is that the university gives us a list of students who have dropped out, and then we do a lot of work to find these students wherever they are. Email, text, phone, all over the web, we have a lot of different outreach strategies. To target the ones who are most likely to come back we use predictive models. It could lead to somewhere between 10-50 touch points that we have with the student. In supporting them in the process of going back to school, the conversation is often times is a mix between transactional and very emotional, like “what made you take a break from school in the first place?” and “is going back to school something you want to do?” That can get underneath the hood around a lot of complex things that are happening in that student’s life. After that, we keep following up and working with the student until they are ready to go back. Sometimes that’s a couple months, sometimes that’s a year, it just depends on where the student is and what they’re ready for.

We do all that work for free, and it’s only once we bring a student back to school that we get paid by the university. This is usually some portion of the newfound tuition for helping them successfully bring a student back. Then we continue to coach the student once they’ve gone back, since we’re dealing with a fragile population that often needs more support because we don’t want them to drop out again. The ongoing support is just as important as the support on the front end. Every time the student takes more milestones forward, i.e. they finish a set of courses, enroll in the next semester, that’s when we get paid again.

A teacher once told Stephanie, “If you do not learn something new every day, you’ve wasted your day.” Stephanie took this to heart and pushes herself every day to challenge the way she thinks and how she interprets the world. But this wasn’t always the case.

It took me eight years to finish my undergraduate degree. Three different schools, two states, two kids, one marriage, and multiple degree changes later, I finally had my degree. I was one of those people who “life” happened to throughout my undergraduate experience. I never planned it to be that way, which makes my academic journey so fitting for a person like me.

My college journey is atypical. It started off when I was living in Memphis. I had applied and been accepted to several universities. I was offered an academic scholarship to Rhodes College, but I turned it down because they were a D III football program and I thought I could get better offers. (Ha. Youth.) But because I waited so long to accept any offers, there was no money for me to go to school.

When I coach students, one of the main things I focus on is their ‘why,’ or their motivation behind finishing their degree. I do this because in my own experience, my ‘why’ was what kept me going from an early age toward my goal of being the first person in my family to graduate from college. My ‘why’ was my older brother Jeffy.